Reverend Dr Godwin Nii Noi Odonkor, has been inducted into office as the 14th Clerk of General Assembly of the Presbyterian Church of Ghana (PCG).

The induction ceremony was held at the Eben-Ezer Congregation of the Presbyterian Church, Osu in Accra on Sunday 1st December 2019.

It was attended by people from the academia, clergy, traditional authorities and Presbyterian faithful across the length and breadth of Ghana and overseas as well as a delegation from the office of the First Lady   of the Republic of Ghana Her Excellency Mrs Rebecca Akufo Addo led by the Deputy Greater Accra Regional Minister,  Mrs Elizabeth Sackey.

Reverend Dr Odonkor, takes over from Reverend Dr Samuel Ayete-Nyampong to steer the affairs of the Administrative Functions of the PCG for the next six years and comes with a wealth of experience from the Ministry.

Reverend Dr Odonkor, in his introductory address as the newly inducted 14th Clerk of the General Assembly of PCG, prayed the Lord to help him take over the mantle as Clerkship and should give him the double portion of the spirit of commitment and dedication, which He had given his predecessors in services.

He said he was committed to drive the Church to fulfill its targets as was decided on at the 19th General Assembly to help grow the Presbyterian church from strength to strength.

Rev Odonkor said, together with all stakeholders of the Church he would work hard to achieve the church’s ten year membership drive Project name “Vision 1.5” to strategically move the membership of the Church to 1.5 million souls.

“Beloved we must be burdened to work out the Strategic Plan, “he said.

He advised that what could be done today should not be postponed to tomorrow to allow the Church achieve its vision within the set time.

He said he would use his six years tenure as Clerk of the General Assembly in consultation with the Moderator and all stakeholders of the Church to ensure its growth.

The Reverend Dr Charles Gyan-Duah, Former Clerk of the Presbyterian Church of Ghana in his sermon urged leaders of all fields of life including the church to remember their roots. 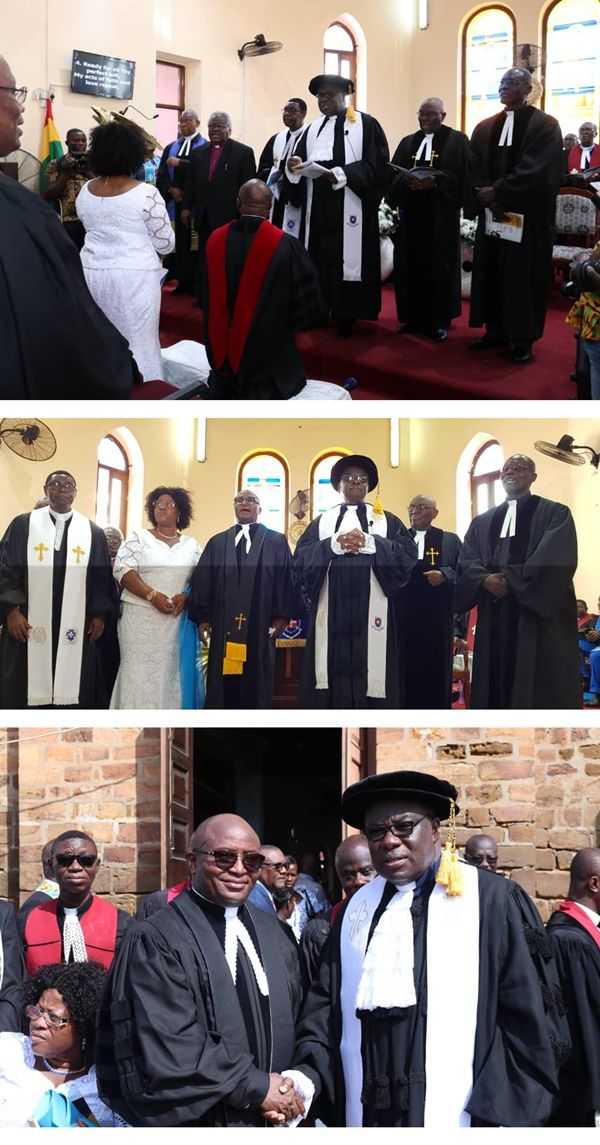 He said many people had risen into various offices of leadership from humble beginning, however over time had forgotten where they came from and had allowed themselves to be corrupted by the power of leadership.

He said it was recorded in the Bible that King Saul at the age of 30 assumed the seat as King of Israel, he did well from the onset but  his latter end did not please God.

Rev Dr Gyang-Duah said like Saul most leaders had begun well but had allowed much misconduct to sway them away from that which was right, adding that if leaders would lead with the fear of God, integrity and honesty the nation would see much improvement and development.

He urged leaders in political and various positions to know that it was God who had given them the privilege to be leaders and had the ultimate power make change.

“It Is God who placed you there and he holds the ultimate power to appoint or disappoint, so let us trust him in all we do.” He said.

Rt Rev. Prof. Joseph Obiri Yeboah Mante, Moderator of the General Assembly, assisted by other past Principal Officer of the Church performed the induction ceremony, and noted that the Church had a role to play in national development and so was every Christian.

The Moderator after the induction told the media in an interview that he together with all officers at the Head office, Chairpersons of various presbyteries of the church and all stakeholders of the church would work hand in hand to support Rev Dr Odonkor to discharge his duties  to meet the set targets of the Church.

He called on all members of the Church to bring on board their skills, talents and abilities to champion the membership drive of the Presbyterian Church over the next ten years to achieve “Vision 1.5”

“We will employ all resources available to grow the Church,” he said.

Reverend Dr Odonkor, until his election, was the Kaneshie District Minister of the PCG and immediate past Chairperson for Ga Presbytery. He has served on many boards of institutions both home and abroad.

AND GOD GAVE ME BACK “ME” ~Ewura Abena